Review key themes that are likely to occupy headlines and conversations in the coming year.

March 22, 2018
The following key themes are likely to occupy headlines and conversations in the coming year

Change always matters in financial markets, and the simple question for international investors in 2018 is, “How much faith do you have in countries and companies outside the U.S.?” The good news is that valuations are generally lower and, in many cases, corporate earnings levels are growing more quickly than in the U.S. The missing ingredient is a belief that Brexit compromises between the U.K. and the European Union can be reached, and reform initiatives to boost economies in Asia and Europe have credibility, political drive and support.

The signs heading into 2018 on this front are positive, building on progress made in 2017. Such progress includes the well-received National People’s Congress in China as well as Macron’s election victory and actions thus far in France. Still, much work needs to be done. If further progress is made, a likely impact would be a stronger British pound, euro and Japanese yen relative to the U.S. dollar, enhancing the potential diversification benefits for U.S. investors.

There has been much hand-wringing about the moderate pace of U.S. economic growth in recent years. However, we’ve seen a similar moderation in global economic growth, driven largely by the same factors as in the U.S. – that is, demographic constraints on labor force growth and a lackluster pace of productivity growth, likely related in part to slower capital investment. The demographic constraints are still there, but productivity growth appears to be picking up around the world. Brexit will be messy, Chinese debt levels are a concern and geopolitical tensions could be a problem, but the global economic outlook for 2018 is brighter. How central banks respond will dictate what happens in 2019 and beyond.

It’s hard not to conclude that the key geopolitical relationship is between the United States and China (“G2”). The latter continues to spread its wings. This is best shown by its expansive “Belt and Road” initiative, which aims to link Europe and China in a giant economic region, as well as a continuation of its large trade surplus with the United States. The ‘free versus fair trade’ debate continues to rumble on, but, given the proclivity of both Chinese and Japanese investors to buy Treasury bonds, pushing too hard may have more significant consequences. A plausible compromise may be found via a lower dollar, which would take the competitive edge off of the surplus countries and reduce the need to aggressively renegotiate other trade deals (such as NAFTA), potentially benefiting global economic and market confidence. With Europe looking inward and the Middle East/Russia more focused on keeping oil prices firm, North Korea becomes the remaining significant geopolitical issue for 2018. Considerable Chinese economic influence on the ‘Hermit Kingdom’ adds another dimension to G2 interactions.

Current Federal Reserve Governor Jerome “Jay” Powell is set to be sworn in as Fed chair on February 3, and President Trump is expected to fill a number of vacancies on the Fed’s Board of Governors. The change in leadership is expected to be smooth. The focus for monetary policy should not change. The unwinding of the Fed’s balance sheet has been mapped out, and officials will stick to that plan.

However, the outlook for short-term interest rates gets cloudier beyond the middle of 2018. How will officials respond to a tighter labor market and a strong economy? The Fed’s monetary policy has long been the focus for financial market participants, but regulatory policy will be placed front and center. Outside of the U.S., global investors will look to central banks to tighten policy at some point, which ought to have some impact on the dollar and on long-term interest rates here and abroad

The investment industry is constantly evolving as technological advancements create potentially faster, cheaper and more accessible methods to participate in the global financial markets. The near instantaneous transmission of information has created new trading patterns. Packaged products for individual investors have proliferated in a market that was previously dominated by institutions that traded far fewer investments. Handwritten stock orders have been replaced with high-frequency trading programs, and intricate retirement income solutions have largely supplanted individual bonds. These advancements have infused additional complexity into today’s markets. The modern investor is faced with more choices and information than ever before. Fortunately, financial planning applications have been developed to navigate this intricate investing environment and enhance professional advisement, enabling investors to more easily work toward their long-term financial objectives.

U.S. stocks remain in a multiyear, broad-based bull market that shares more similarities to the 20-year post-World War II and 1982 – 2000 periods than the lost decades of the 1970s or 2000s. Secular bull markets have, on average, lasted about 14 years and enjoyed annualized returns of around 16%. Moreover, just like no one begins to measure the 1982 – 2000 bull market from the absolute price low in the S&P 500 set in 1974, we believe this secular bull market began not at the low of March 2009, but when it broke out above the prior-2007 peak in 2013, meaning it remains relatively early in its cycle. Stocks will fall at times during secular bull markets but, historically, these have offered more favorable opportunities to buy rather than reasons to worry. The S&P 500 is up about 285% (on a cumulative basis) since the March 2009 bottom, but this pales in comparison to the 1400% gained during the 1982 – 2000 period. 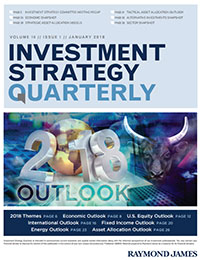 All expressions of opinion reflect the judgment of the Research Department of Raymond James & Associates, Inc. and are subject to change. Past performance is not an indication of future results and there is no assurance that any of the forecasts mentioned will occur. There is no assurance any investment strategy will be successful. Investing involves risk including the possible loss of capital. International investing involves additional risks such as currency fluctuations, differing financial accounting standards, and possible political and economic instability. These risks are greater in emerging markets. The S&P 500 is an unmanaged index of 500 widely held stocks. Investors cannot invest in it directly. The performance noted does not include fees or charges, which would reduce an investor’s returns.

Contact Info
Check the background of this firm on FINRA's BrokerCheck.

Raymond James financial advisors may only conduct business with residents of the states and/or jurisdictions for which they are properly registered. Therefore, a response to a request for information may be delayed. Please note that not all of the investments and services mentioned are available in every state. Investors outside of the United States are subject to securities and tax regulations within their applicable jurisdictions that are not addressed on this site. Contact your local Raymond James office for information and availability. Links are being provided for information purposes only. Raymond James is not affiliated with and does not endorse, authorize or sponsor any of the listed websites or their respective sponsors. Raymond James is not responsible for the content of any website or the collection or use of information regarding any website's users and/or members.
Privacy Policy